Today came the „D“ day and we woke up at 4AM to go to the airport to wait for our rescue. After arrival we waited for 45 minutes and started to be nervous already, because we still did not see them. Suddenly, they appeared and had a big blue suitcase! I cannot describe that luck, just look on the movie:
Happy and full of expectations we drove home to get a little more sleep and then we started to install the engine. You can watch another movie from the assembly:
Today afternoon we can already drive further, direction to Tbilisi, where we are going to meet our friend and tomorrow we go on direction Russian border. Now, we can only thank again to everybody who helped us. Without you, our trip would be now over. We really do appreciate that very much!

Today we again slept well and then started with taking out the engine. It went quite smooth and we even did not need any special tools, just had everything on hand. Everything was done in the garage of a guesthouse where we stay. 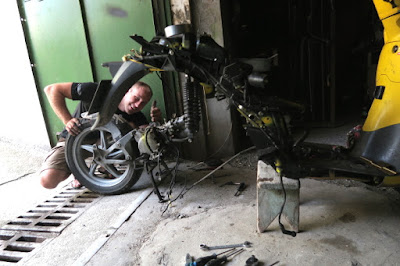 I took extra care so that we do not pour the antifreeze anywhere, puting it in a plastic bottle aside, to be able to use it again. Then, Radek goes, kicks in the bottle and all the antifreeze was on the floor 🙂 OK, then we will leave here a sign of us. We also found out that the belt from Radeks scooter is gone after 3,5tkm and the rear pulley is faulty. Luckily we have a replacement one with us. What is strange, that we checked everything before the start of our trip and it seemed ok. Looks like the Honda from Radek plays a strange game with us. But, we are ready, engine is out and waiting for a replacement one. 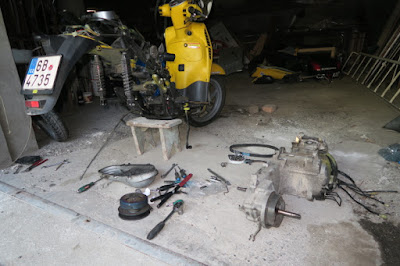 Today we relaxed actively, long sleep until 10 in the A/C room and then went to the airport to make sure that you can receive an engine in Georgia. We were said that there shouldn’t be a problem at all, so hopefully it will be like that. On the way back we met a tuned Honda with a custom exhaust system and the driver even made a small show for us. See the movie:
In the evening we went for a beer to the city, it was very pleasant to sit next to the river. Very funny was a toilete in this restaurant 🙂 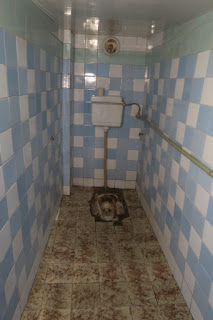 Then, walking through the city we were catched by some random guys sitting in the park, who immediately ran to buy a bottle of Vodka and chocolate to host us. We were drinking for friendship and Georgia 😀 Then we had to run away, otherwise we would end up drunken again 🙂 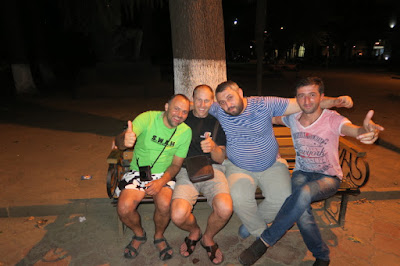 In the morning we set out and after half hour the Honda from Radek lost the power and the engine was gone. What now? We were about 30km from the nearest city Kutaisi. Needed Internet, accomodation and started to sort out what the next steps will be. I went to the gas station to buy a towing rope, we took the scooters and went. Here is a movie from the drive:
On the suburbs of Kutaisi some guys in service let us to go on the internet, we found acoomodation which seemed fine for a very fair price with A/C, Internet and Parking, so we checked in and started to think about further steps. Our main concers were:

So, we wrote a message on facebook about what happened and started to get offers for help, which was so nice. Within 2 hours we found a friend of a friend who goes in 2 days by plane from Poland to Kutaisi and would take the engine with, if we pay the extra luggage.

George from Scootland took out the engine from scooter the same day, clened, measured the weight and we found out that it fits to the limit of 32kg, which is for the luggage for airplane. Hope starts to come. The same evening the engine was packed and ready to be shipped. 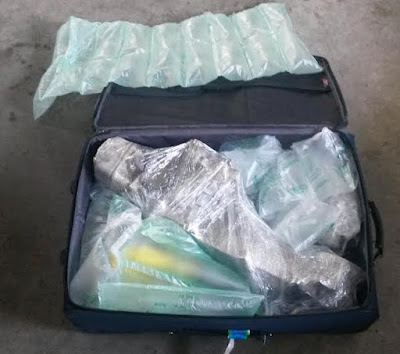 In the evening we went for a beer to relax and calm down.

In the morning we again get woke up from the mosque, but are not surprised anymore, so we slept further, got a breakfast and set on the way. The plan was to reach Georgia as soon as possible, so we took the last 150kms at once. On the border was everything fine, so after one hour we could go on to Georgia. The way from border around the coast is quite full of cars and traffic is dense and hard.

In Georgia you practically meet no motorcycles and it is no wonder. Driving a bike here is a russian roulette with your life. On the other hand, if you like an action style of driving, you will love it here. Everybody is a racer and goes full throttle, no matter if you drive a V8 Mercedes or old Ford Transit.

As soon as it was possible we went from the main road and the real relax started. Nice roads, animals around, lots of green.

In the first small city we stopped to eat and decided to change the oil for a denser one, as the Honda from Radek was knocking more and more and it was obvious that if no miracle happens we will soon have a serious problem. We bought the 15W40 oil and changed it in the local service. There were pieces of alluminium in the old oil, which was not a good sign at all.. 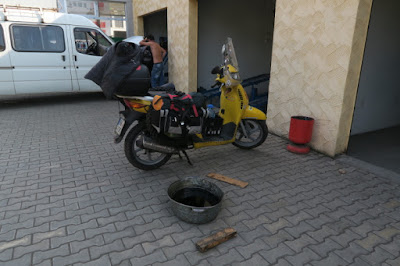 We went on and stopped in a small village and asked for a place to oversleep in the tent. We do it like this so that the locals know about us and also sometimes happens that we get an invitation somewhere. We were told that we can sleep by the local school, there is a fence around and nobody cares, the school is closed during the summer break anyway. Just bought few beers in the market and go to park the bikes. Taking a rest come one local guy, then another, third, fourth and all are speaking to us. Within the next hour around 12 people are coming there and forth.
After a while comes also bottle of wine and vodka and we have to drink. Then, one of the men opens the school and takes us inside with offer to oversleep there. Great! Then, we dring again and when I see that Radek has already more then enough I am taking him away to sleep. 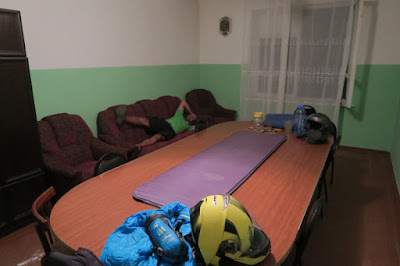 The school was frightening in the night, like from a horror movie. Many strange noises, shouting vampires or whichever animals and very very hot. Before asleep I go for a toilete and see one of the guys sitting on my scooter, so I say myself hopefully it will be OK. Before I finish my duty I see 5 guys taking the scooter on stairs and trying to push it through the door inside of the school. So I said them it is impossible because of the side racks. They took it again down and we went to bed with a smile.
The night was awful, I was several times awake from strange noises, every time going out of the room to check whether somebody is there. Radek snored on the couch and was happy. In the end a bit sad story about deportation of our host, if you can understand russian, you can hear how it is if somebody comes and takes you out from your home..
Scootland – skútry, scooter tuning, náhradní díly, servis
DALŠÍ PŘÍSPĚVKY
Najdi své oblíbené téma
Vše Aktuality Zajímavosti Návody Zvýšení výkonu Cestování Video