Dear friend, fans of scooters and travelling. We would like to introduce you your long round on small scooters, which starts on the 1st on August. We decided to go to Kazakhstan on two scooters Honda SH 150, which we bought for $800 each.

The idea is to show to us and also others, that a huge budget is not necessary for a long distance travelling and also, that even a small scooter can compete with a huge travelling bike, if you have enough enthusiasm. 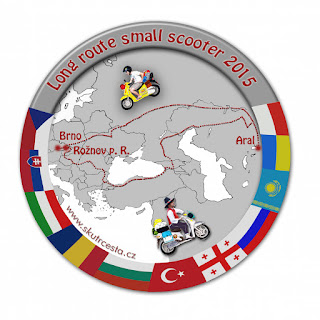 Who is going to drive?

scooter enthusiast and organizator of a big „Wallachian scooter meeting“. This meeting became the largest in Czech (and maybe even central/eastern Europe) with over 620 scooters in 2015. Radek is privately using his well and with love maintained Vespa ET4, but since he has bought the traveller Honda, he is not using his Vespa so often.

Hynek Přidal
founder and owner of Scootland, which is a shop for scooter parts and service (website on www.scootland.cz) . Hynek’s love are scooters, following him his whole life, professional same as personal. He is driving his Benelli Adiva for already 10 years and in his living room you can find a tuned Vespa PK, which was produced in the same year as Hynek himself (1984).

How this idea came?

We drank beers after driving Bobcross in winter and spoke about travelling on scooter. I said to Radek my dream – to go to Kazakhstan and see the dryink Aral lake, but I am missing a buddy. Radek commented this with words, that he is for every crazy idea that covers scooters, but he thinks that the scooters will not do it. I am saying that they will, so I made a bet for a small beer, that we will arrive back on the wheels.

In following weeks we will bring you news about preparations and the journey. Our first stop is scooter camp in Slovakia, from where we drive on 1st to Romania and Bulgaria.