We thought that all the bad luck was taken yesterday and that we will move significantly and do over 500kms. On Google maps, the road looked beautiful, only straight. What came exceeded the worst expectations we could have. We both agreed, that on such a bad road nobody from us every drove. After 40 kilometers on stones we thought it cannot be worse. Well, it could and definitely was. From stones it became dust-sand and later only sand. We did not count with anything like this, so were left to fight with the circumstances on the road tires. It was crazy. We could not and did not want to go back, which would mean extra several hundreds of kilometers and one day back, so we went forth, but it was really hell. Following movie shows how tough was this drive..
Our hapiness after we found the stones again was huge. Now, after all the sand it was like driving in heaven. Overally had this hell part (dust, stones, sand) 86kilometers and we spent over 3 hours to go through. Then came again asphalt and we were only hoping that it will remain like this. Unfortunately, according to locals the way we had in navigation was not possible to go on scooters, but we can take another one, which is 80kilometers longer with 30kilometers on stones. OK, let’s go. Fortunately good people are helping us on our way and even now the locals in Lada Samara told us to follow them and from all of the horrible ways they led us through the less horrible one and also saved us from another 3 wild dogs, that ran to the Lada and then did not manage to run after us. Uff, thanks thanks thanks! We gave them several gifts and took some pictures. 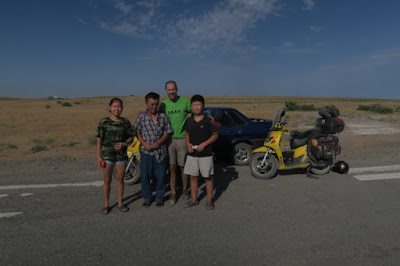 Then saw a group of 4 people on small moped-motorbikes Honda Innova 125 going around. It were Germans going from Mongolia. 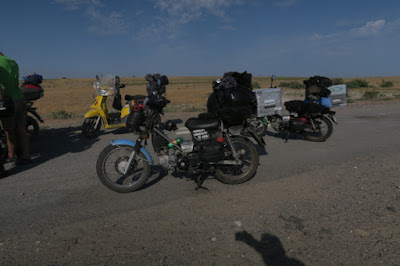 We exchanged some tips and contacts and went to the Astrachan city, where we were accomodated via Couchsurfing in a lovely natural place and we were really lucky to have a place to rest. Hopefully tomorrow will be better.

We set out shortly after 7AM, as we count with a delay on borders and want to make as many kilometers as possible from Chechnia, about which we haven’t heard anything good. On the borders it was suprisingly smooth, nobody asked for money. We only had to wait long, but finally came to the window. The forms in azbuka made us lost in papers, fortunately we were saved by a very kind police woman, who could speak few words Czech. Thanks!
Full of expectations we came into Russia, but never drove too long. One police control after another, really every appr. 15 Kilometers we were stopped, checked and asked from where we are, where do we go etc. Radek saved the situation with his patience and communication skills and gave them several presents, which made the checks much faster.

We also found the truth about Russian roads. Practically, you cannot rely on Google Maps, because a difference between an asphalt and mud is non – everything looks same on the map – as a road. We also had our first critical moment on the way. Going on asphalt, then stones, then dust. According to navigation are we on the main road so we go on. 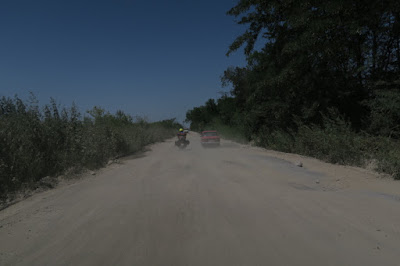 Suddenly appears a big dog on the side, so we decided to go on and accelerate. He ran behind us, but our Hondas were luckilly faster. Slowly we are moving forth and then we see in a distance another two big wild dogs, that are barking on us. It was obvious, that we will not make it. What should we do now? We can’t go back, as there is already one angry dog which knows about us. We can’t go forward, as we maybe would not manage to go around the dogs, also the terrain was unknown, so it could happen that you fall down or cannot go fast enough to lose the dogs and risk a bite in a leg. Finally we got an idea to go around them across the field next to the road, behind trees. The problem was that at the end of the field we were hardly able to get the scooter out of the dust, both of us had to carry first one scooter and then another. All this on direct sun in 37 degrees. But, we made it! OK, let’s go on. The road was changing better and worse, finally we are coming totally exhausted into Neftekumsk city, where we take a hotel Druzba and go to bed. 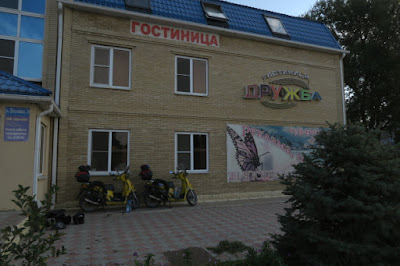 After sleep in Gori and a nice evening spent with owners of the Guest House we set out to see the Stallin museum, which was 10 minutes from our stay. So, we visited it and were wondering how such a cruel person who ordered to kill millions of people has his own museum, which presents him like a successful politician. The house where he was born still stands, well it is a small house where his family was renting one room. All houses around has been destroyed to make space for the museum and only this one stands in the middle. We also looked inside of a train wagon, which he used for travelling. It even had air condition, in 1950s.. 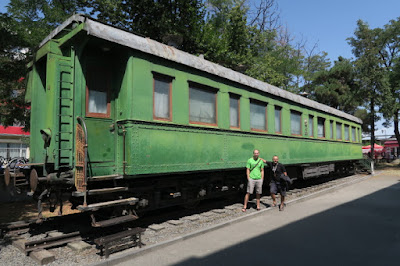 We also stopped at caves in Uplistsikhe. 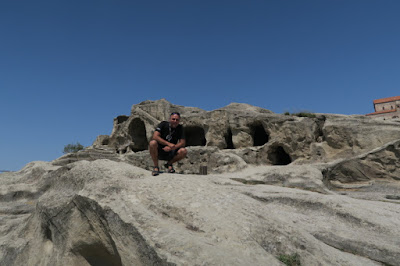 From there we continued to Tbilisi to meet our big inspiration, a traveller whom we both admire. His name is Stefano Medvedich, an Italian who travelled through Africa on his Vespa PX125 and now he was on the way back from Siberia. Our paths have crossed in Tbilisi, where he was fixing his broken engine. The meeting was short, due to the lack of time, but very nice and friendly. 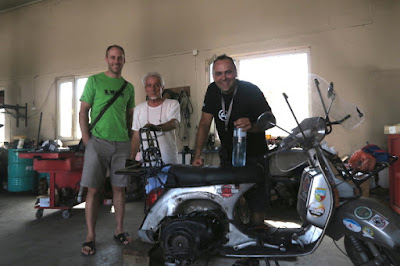 Then we headed north to the Russian border and met two guys from Czech, who are travelling in an old VW Beetle. We spoke shortly about our projects, Radek, specialist in cable tie straps and glue fixed the Beetle and we go on. We found accomodation in the last village before the Russian border. 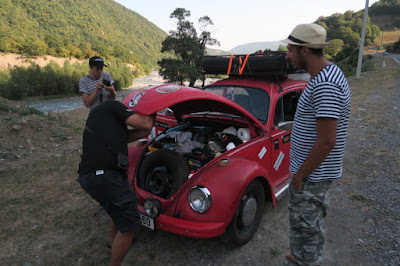