We thought the last day we will only fly home with a great drive, but it was not that good. No enerty left, no hapiness from driving itself and just going through endless Poland and thinking to be finally at home. At the borders our friend joined us with BMW GS and lead us home, which was useful, as the charger from my phone stopped working and we had no navigation. In front of Roznov also another friend joined us on his scooter and then, we finally arrived in Roznov pod Radhostem in MaiCafe, where we had delicious coffee and some sweets and friends were waiting there to welcome us.

We would like to thank all of our fans and friends for support on facebook and personally as well. Finally, everything worked and even my scooter despite knocking engine drove back without any single service. Radek won a small beer, so I will pass it to him when we see us next time.

Some summary of the trip will follow after few days, when we enjoy being at home. Once again big thanks to all of you for a great support.

Today is Ukraine ahead. Everything OK on the borders, only one officer asked for some $ for coffe, so we gave him something like $1. Everything was with a smile and I think even if we would not give anything, we would pass smoothly.
Ukraine was beautiful, nice roads, great services, food and drink for good prices, people are nice. Behind the borders we inflated the tires and took a pictures on a beautiful Dnepr bike, with which Radek fell immediately in love. 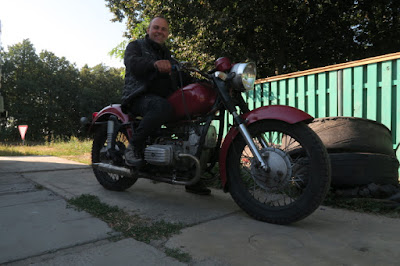 Today, we did over 700kms, crossed Kiev and took a picture of stylish decoration in a restaurant. 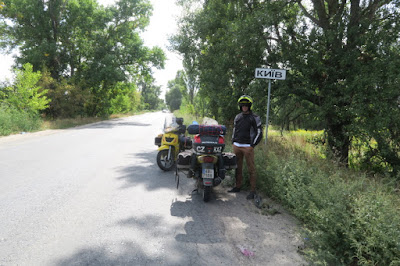 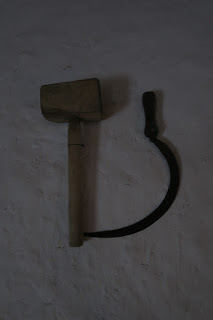 Accomodation was found at a motel next to the street, in renovated rooms for hard to believe price $9 for both of us, including parking of scooters behind the gate. We took a dinner and looked forward that if everything runs well we can reach the homes by tomorrow evening, there is only last 650kms left.

We spent the whole day driving in the trucks. The drivers did a breakfast and lunch on the parking lot, so we had our trip with the meals included 🙂 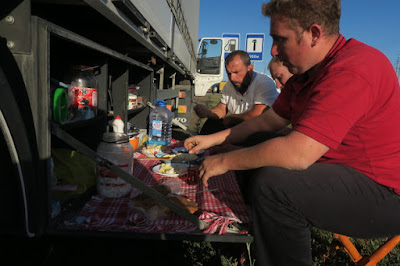 In the evening we are comming to the Russian-Ukranian borders and leave the cars on the petrol station. It is already dark outside. Drivers tell us the motel is around 5 kilometers and borders 15 kilometers. We went to find the motel, but there wasn’t anything like that, came back to the petrol station and the guy told us there is no motel around. Then, we asked wheter there would be some place to sleep in the tent and he showed us a place behind the petrol station, where we could overnight. It was stylish, with decorations.. 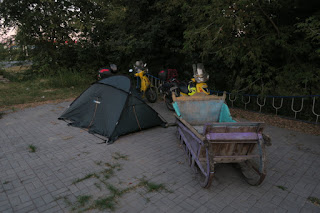 Our hapiness from saving us 2-3 days of drive on the terrible russian road was huge. Now, there is only Ukraine and home, and even if the engine dies there will be a way how to get the scooter to Czech.

We are around 4 hours from Russian border, so lets go. We decided to take the shorter route, which is destroyed and in a bad condition. However, we still have offroad tires on. Now, it shows how good was the decision to leave them. Again, lowered the pressure, the scooters got softer and we flew over the worst roads you can imagine. It is nearly unbelievable what difference the higher profile of tires and low pressure makes.

Over 1000kms we also keep asking the truck drivers to take us, but had no luck yet, they are going other direction, have full trucks etc. On the russian border I speak with a guy in Transit, but he is full as well. Then, there war 2 turkish trucks, but the drivers could not speak nor english, german, russian. Luckily, the guy from Transit spoke Turkish, so he explained them what we need and they said they would do it and we should wait behind the borders. 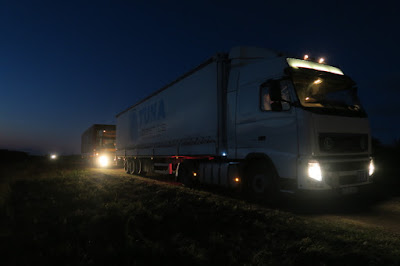 The border check was no problem, russian officers even communicate in english with us, which is very surprising and everybody is extremely pleasant. Behind the borders we wait for truck and are quite nervous, as we both wish this to work, because the knocking gets louder and we are in fear for the second engine. Once you enter Russia with a scooter, you have to leave it as well. If the engine dies, there are 2 possibilities, to burn it or to say it was stolen, in both cases it means a lot of paperwork and delay. And, there are also all the things we carry left.

After an hour, the trucks are coming and we give the money together. They want $300 from each of us, which is quite expensive, but on the other hand we will cross the whole Russia and from Ukraine we can sort out the transport of the scooter, if it dies. We dont have more like $250 each, so making the price a bit lower, loading scooters and gooo!!! Yeah! So much luck again. In the next 2 days we will rest and then only finish the trip via Ukraine and Poland to Czech. It is again unbelieavable how much luck do we have on our journey. 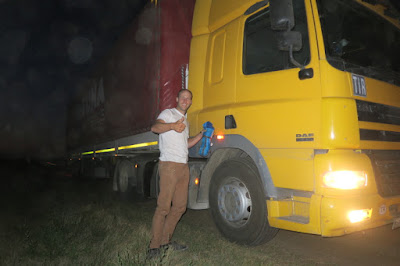 Radek tied his scooter wrong and it fell after some time and the windshield was broken, but never mind. Road is terrible, asphalt destryed and the trucks are not able to go more as 30kph. The guys are good drivers and drive long until night, in the same evening we did over 300kilometers. Night was spent in the trailer, where after a long time I can finally add some more pictures and info on Facebook and blog. 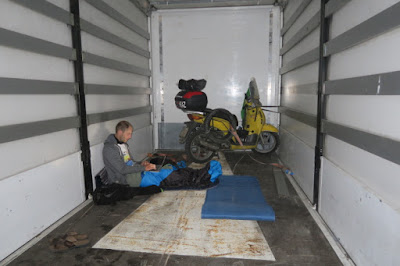 We are fine, there was a shower available in the motel same as a dinner. Tomorrow evening we will be at Ukranian borders.

We wake up soon and set out. It is obvious that we will not make the whole Kazakhstan today, but will try to do as many kilometers as possible. Unfortunately the engine on my Honda knocks louder and louder and it sounds quite similar to the sound of Radek’s engine before it died in Georgia. But, it runs still…

Basically the whole day we just drove, with stops for fuel, which we need more often, as on the offroad tires the consumption raised for one liter and for the full tank we can make only around 140km. One nice picture of Radek, when he took off his helmet and had a Prodigy-style haircut. 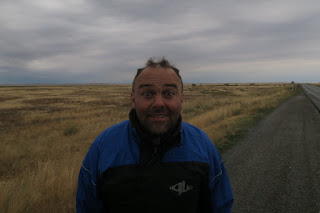 I also looked forward that on the way back the strong wind will push us. Like in the murphys laws, the wind turned and we drove back against it as well. What was just great is weather, it was fantastic. There are clouds and temperatures are around 20-25 degrees, which makes the journey quite pleasant. 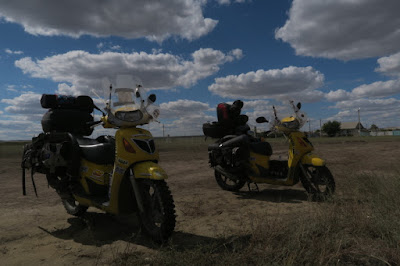 On the petrol station we meet extremely loaded Daewoo Nexia, full car of stuff, fridge on the roof and a huge trailer full of things. The guys were from Uzbekistan and transport things from Russia. They only take use things, as there are no import taxes. 1 kilogram costs 150 Rubles (something around 2 USD) One way is 8 thousand kilometers (4 there and 4 back). Guys were really nice and we had a nice chat and did few pictures with the car and our scooters.

In the evening we look for the place to sleep and find a Cafe next to the road, where the owner lets us sleep outside under the roof. There is no electricity and no water. To be polite, we at least order dinner, as she wants nothing for the night. Radek shows, that we want chicken meat and jumps there around showing a hen and we also say Net baranina to avoid the sheep meat, which we are already full of. The woman looks like she understands what we need to say and with a big surprise, after 10 minutes we get 2 plates of sheep. What was worse, the meat was already expired and stinked. What now? I suggested to leave it on the table, but Radek said it is unpolite and pretended to eat with an empty fork. Finally he said he will finish the meal outside with a cigarette and threw it away :)) 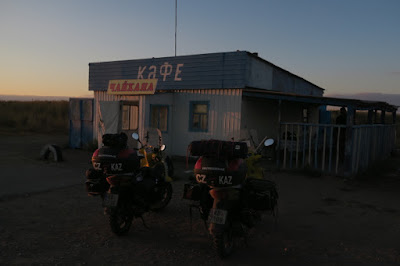 The night was fine and the mosquite net worked finally, which was great as there were many many mosquites all around.